Is Peanut Labs a scam? That seems to be a pretty popular opinion around the internet, but is Peanut Labs really scamming people, or is it just not worth the bother?

Let’s take a look and discover the truth….

If you're over all the make money scams and sites that pay peanuts, click below… 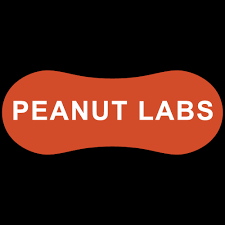 What Is Peanut Labs and How Does It Work?

I’ve personally joined and been involved with quite a number of survey platforms over the years as well as rewards sites, so I have quite a bit of experience with them.

The San Francisco company has been operating since 2007 online, so it’s been around for a while now despite all the claims on various sites that it’s a scam.

Currently Peanut Labs has more than 3 million members and claims to have paid out over $10 million in rewards to those members. If you do the math on those figures, that equates to roughly $3.33 per member earned on average overall.

Not much cash when you look at it like that.

Click here to learn how to make $1000s a month online in passive income with affiliate marketing. 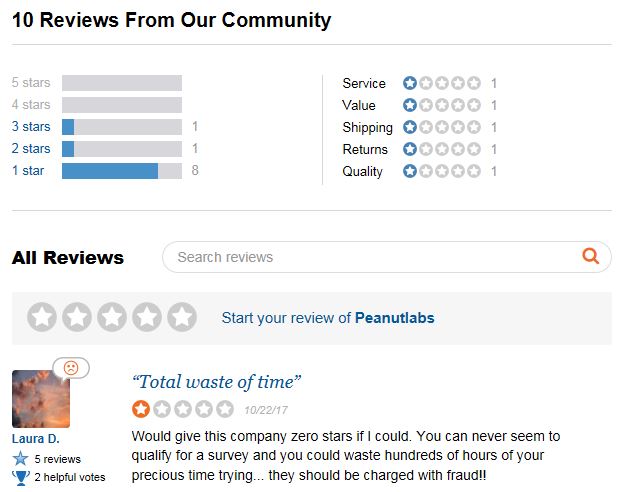 How Can You Earn On Peanut Labs?

To join Peanut Labs you can’t actually do it via the Peanut Labs website. Instead, Peanut Labs integrates itself with other platforms, such as rewards sites like Swagbucks and Inbox Dollars. To gain access to what’s on offer at Peanut Labs, you will need to join a site that has the Peanut Labs platform integrated within it.

Once you do access Peanut Labs through a third party site, you will then be able to create an account and answer a series of profile questions. Form that point on you’re good to go to start earning rewards.

The main thing to do is take online paid surveys, but be warned, Peanut Labs literally do pay peanuts for these. The average Peanut Labs survey runs for about 20 minutes and pays a whopping 50 cents for your time! Wow.

The other downside to the surveys there, is they are too few and far between.

Other ways you can earn with Peanut Labs is by taking up offers like getting insurance quotes and various things like that.

If you do a Google search for Peanut Labs you’ll come across countless mentions of complaints and people calling the site a scam.

The biggest complaint of all is people not getting credited their rewards after completing a survey. This one seems to be very common practice with PL. For a start it’s hard to get past their screening questions, and when you do and take the time to complete the survey, they fail to reward you anyway.

As if doing paid surveys isn’t pitiful enough when it comes to how much they pay, let alone doing stacks of surveys and never seeing a cent for them.

People are also supposed to earn rewards when taking up various offers or performing other tasks as well, but again the same complaints about not getting rewarded.

Anyone looking to make a little extra cash online, or have their very first taste of making some money on the internet.

How Much Does Peanut Labs Cost?

It’s free to join the platform through other rewards style websites. 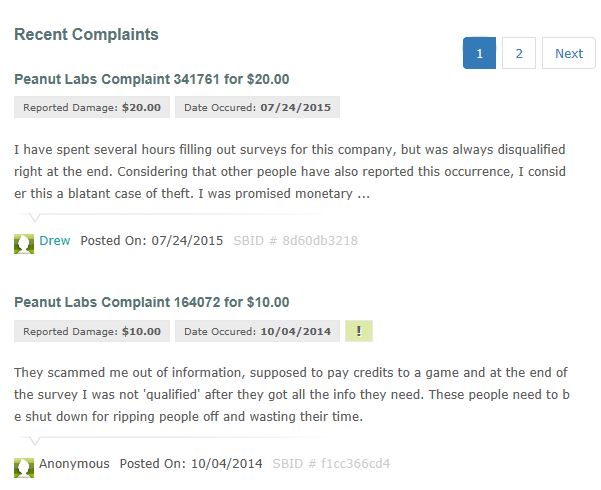 Is Peanut Labs a Scam?

I’m kind of close to labelling it a scam, despite the fact they’ve been around since 2007. From what I can gather they used to be very good, but in more recent years things have really been on a downhill slide. It sounds like they just don’t care anymore.

I’ve read complaints about their customer service either being rude or non-existent, payments going missing, completing surveys and tasks and never seeing the rewards credited, countless hours spent trying to qualify for surveys and then getting told you don’t.

Even apart from the rather dodgy business practices, when they do pay you something for your efforts, it really isn’t worth the bother. Compared to other surveys sites, PL pay out terrible amounts for the time you spend filling out their surveys. There are much better survey platforms out there.

I’d give Peanut Labs a really wide berth based on the research I’ve done. You're probably better off playing the lotto. 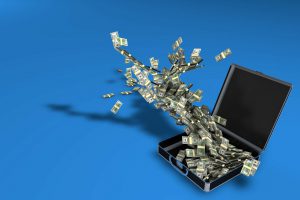 If making good money online is the goal, you will never make decent money online doing paid surveys of any kind, with any platform.

The real way to earning a great online income is with a business.

I do affiliate marketing. It takes some time and work to get things rolling, but the results are well and truly worth it. These days my business brings in over 10k a month. Much of that income is now passive. I wake up in the morning to see I’ve made money overnight. And that’s an awesome feeling.

What this means is that your business works for you, rather than you always having to work in it. Work I did 2 years ago still earns me money today.

If you would like to learn more about it and the best way to get started, just click on the banner below.