Get Cash For Surveys – Scam or legit platform to make a little money online? Many people look to surveys to make some cash, but are they even worth your time?

Read on to learn more…

Company Name: Get Cash For Surveys

Get Cash For Surveys – Review

The internet abounds with opportunities to express your opinion online; whether it be via social media, writing a blog, commenting on YouTube videos or other people’s blog posts, never before has there been so much scope to have your opinion heard or read. There are also opportunities to be paid for your opinions and reviews, and that’s where online surveys come into the picture.

Get Cash For Surveys was started by a man named Gary Mitchell. While attending a casual barbecue, he conceived the idea for the business after a friend showed him a cheque he’d just received for completing online surveys. At the time Gary was really struggling for money and burdened with a lot of debt. He had no way to pay his bills, with no job and no regular income. He also had a child to take care of. After seeing the amount of money his mate was bringing in from doing surveys, Gary jumped on that bandwagon and immediately signed up to start taking surveys himself.

Companies spend billions of dollars annually performing market research, and Gary wanted a piece of that in a big way. Pretty soon he was getting 5-10 survey invitations a day and was making hundreds of dollars every week.

Taking surveys evolved into another idea, where Gary created a sort of software program that became an easy-to-use survey directory. Users could readily sign up with a multitude of survey companies all from the one location, without the need to spend hours or days or weeks searching for all these companies by themselves. Those who sign up for Get Cash For Surveys are paying for the privilege of having all this information conveniently located in the one spot. Gary has personally vetted all the survey companies to make sure they are legitimate and actually follow through with paying people for their time.

The biggest positive is the time saved by using Gary’s program. Finding legit survey companies, where you meet their criteria, and knowing that you will get paid for the time you put into the surveys, is one of the biggest hurdles when it comes to this form of online income stream.

Actually, that’s about the only real positive I can come up with for Gary’s survey package. You are paying him for convenience, really.

While I don’t think there is too much wrong with this idea, I really don’t think it’s worth the money. For starters, survey companies don’t pay much, which I explain in further detail below, and they’re very time consuming. Gary’s package saves you some time in searching for companies, doing all the logging in and son on, but apart from that it doesn’t offer much else of benefit for the purchaser. And it’s pretty rare that a company will send you a product that you get to keep so you can do a review on it, as is promoted heavily in Gary’s sales pitch. 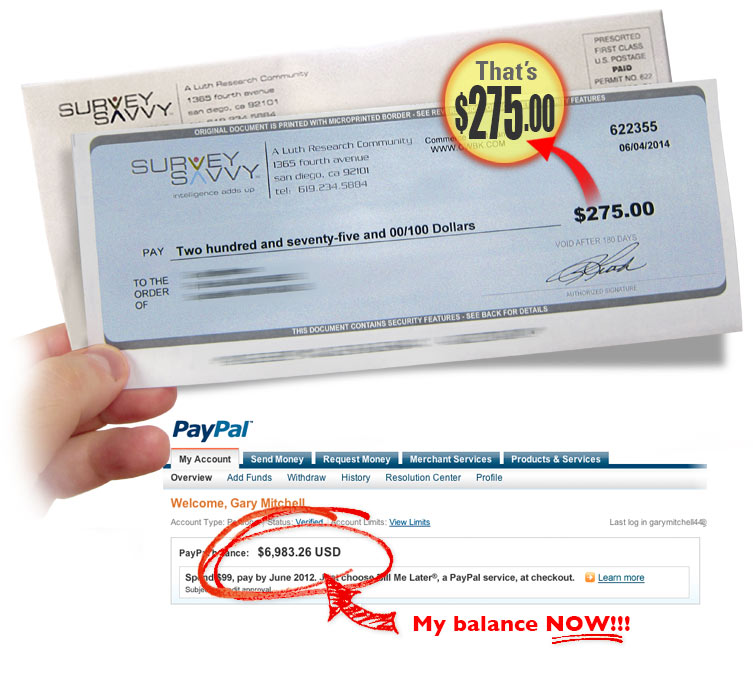 It would take a million years to make this much money from doing surveys.

I’ve done online surveys on and off for the past two years, and have been involved with more than twenty survey companies. Most of these I ditched pretty quickly because they either didn’t credit my account for the work I’d done, or suffered constant glitches halfway through a survey, not allowing me to finish and having wasted twenty minutes of my time for nothing. Also, many surveys ask a multitude of qualifying questions. I started a survey once that dead set asked me more than 50 questions before finally telling me I didn’t qualify for the survey! I spent close to half an hour answering questions, thinking I was well into a survey, only to be told I didn’t qualify. What did I get for my time? Zilch.

In over a year of doing surveys consistently for about six companies I didn’t mind, I think I made a little over a thousand dollars; and more than half of that was paid out in gift cards. Many survey companies don’t pay cash. Some do – via PayPal or direct deposit – but most don’t. And like I said above, to get to do a review of a physical product that you get to keep is a very rare thing. For sure they have those opportunities, but only a very select few win the chance to review products.

How Much Does It Cost?

It costs $74 to gain access to Gary’s software directory. This is a one time payment, not an ongoing monthly deal. In my opinion it’s not worth the money, simply because it takes forever to even earn $74 doing surveys.

While Gary Mitchell’s product isn’t a scam, all the hype in his sales pitch about how much money you can earn taking surveys is. Way over-hyped. Surveys pay peanuts for your time, often working out to be about a dollar an hour. Sometimes more, sometimes less. You will spend a lot of wasted time, too, being rejected after the qualifying questions, and surveys suffering malfunctions midway through. The only way you could possibly earn thousands per month taking surveys would to be doing about 100 surveys per day, which is impossible both in time, and in the number of survey invites you would get. You just don’t get that many surveys.

If you seriously want to set up some online income streams that are worth your time and effort, then I recommend you check out a company called Wealthy Affiliate.

It’s free to sign up for a starter account and you can also access free training that teaches you step by step how to start a successful online business. There is an option to sign up for a Premium Membership that gives you complete access to all the great features WA has to offer, but that is purely optional. As a Starter Member you still get access to the comprehensive Getting Started training, and you even get to set up and host two free websites. You’ve got nothing to lose by checking it out and everything to gain!

4 thoughts on “Get Cash For Surveys – Scam or Legit?”