Is Cash For Patriots Program a scam or not? There seems to be a lot of conflicting information out there about this scheme, so what’s the real truth? Is there really any extra, easy cash for patriots, or is this just some sort of con job to suck patriots of their cash?

There is some confusion out there about Cash For Patriots Program, so I decided to dig deeper and write a review on what I found out. By the way, it’s good to see you here reading my review on this, as it shows you also do your homework and likely won’t ever get suckered into a scam.

While the internet offers many awesome opportunities to make some money, it’s also alive with con artists trying to extract your cash by promising the world and never delivering. On my website I review both the good and the bad so readers can make informed decisions and avoid the scams in the process.

Let’s see if Cash For Patriots Program is really any good or not.

Copy how I make $1000s a month online. Click below for info…

What Is Cash For Patriots?

Apparently this is something anyone can make money from, according to presenter, Zach Sheidt. It doesn’t matter how old you are, whether you’re male or female, or your income level or social status.

Zach makes it all sound so easy though, like all you have to do is join a list and checks will be arriving in the mail like magic.

Apparently this is based on President Donald Trump’s new tax reform bill, where some $2.6 trillion is there to be distributed among American citizens. This isn’t a Social Security fund, but a privately funded initiative.

But does Zach’s Cash For Patriots Program actually have anything to do with Donald Trump’s tax reforms? Or is this guy just trying to cash in on this scheme in some way?

The presentation video runs for almost an hour and is filled with sales hype. Zach rambles on for ages about all these people receiving checks in the mail, how much they were for and so on. Eventually he gets around to mentioning that the money is related to Trump’s tax code. 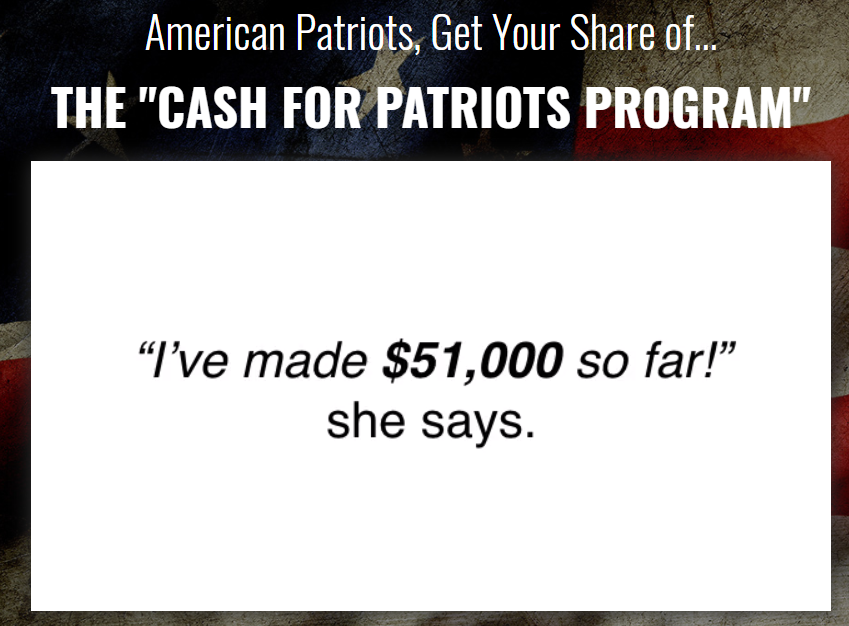 Of course, there’s never any proof shown that these people really received any money whatsoever, or whether these people are even real. We basically just have to take Zach’s word for it that it’s all true.

This is a very typical sales video, and the ramblings, hype and tactics are all so familiar when it comes to make money products, schemes and training.

For some genuine training and opportunities to make money on the internet like I do, take a look at the Wealthy Affiliate platform. It's free to check out.

Cash For Patriots Program is brought to us by a company named “Agora Financial”, and I’ve written reviews on a number of their offers in the past. Basically this company offers investment advice, and does the majority of it through getting people to pay to subscribe to their various newsletters.

A few other schemes I’ve reviewed that are run by Agora include:

What Zack says is that he can help you claim these lucrative checks, and not just one check, but collect them on an ongoing basis. The only catch is, you first have to agree to subscribe to his monthly newsletter, which comes at a price, of course.

Once you’ve joined the newsletter you’ll receive all the instructions you need to start getting these checks mailed to you. The checks don’t come from the government, but from the private sector. And like I also mentioned earlier, there are no real restrictions or requirements to be eligible to collect them. 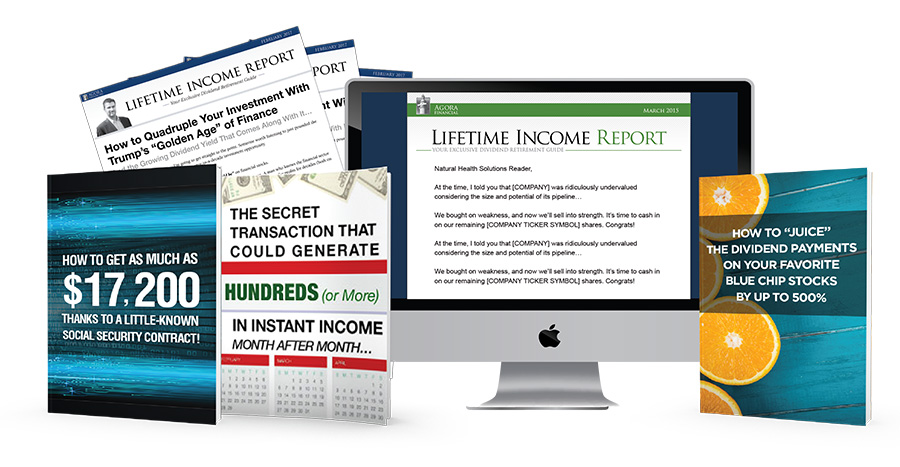 This company are notorious for making money through offering, sometimes dubious, investment advice for all manner of things; whether it be stashing money offshore to get out of paying tax, right through to which hot stocks to invest in.

They actually have nothing to do with any money distribution related to Trump’s tax reform. What Zach and Agora Financial do is offer advice on how to get your hands on money that has been kept overseas, but will now be making its way back to American shores due to the government’s recent changes to the tax system.

This cash will be distributed in the form of company dividends, so again Agora are offering advice on what companies to invest in so you can take advantage of all this money coming back onshore.

The reason companies were storing the cash in tax havens was to avoid paying massive taxes back in the US. As things have now changed in this regard, it’s the belief of Agora that the money will be returning. In order to cash in on the dividends, obviously you must first become a shareholder, and this is where you’ll gain access to insider knowledge by paying to subscribe to the newsletter.

The Cash For Patriots Program isn’t real. There is nothing actually named this, except by Agora Financial. It’s just the name they’ve attached to their sales pitch to get people to join their newsletter.

That’s not to say there isn’t money to be made from Trump’s new tax code, as money will likely be returning to US shores, but Agora make much of their money from newsletter subscriptions, so that’s what they’re really selling people on here.

I guess this is aimed at anyone looking to get their hands on some extra money. That’s how Zach presents it anyhow. Really it’s targeted at stock market investors, people with a bankroll who are looking for hot stocks and companies to team up with.

How Much Does Cash For Patriots Cost? 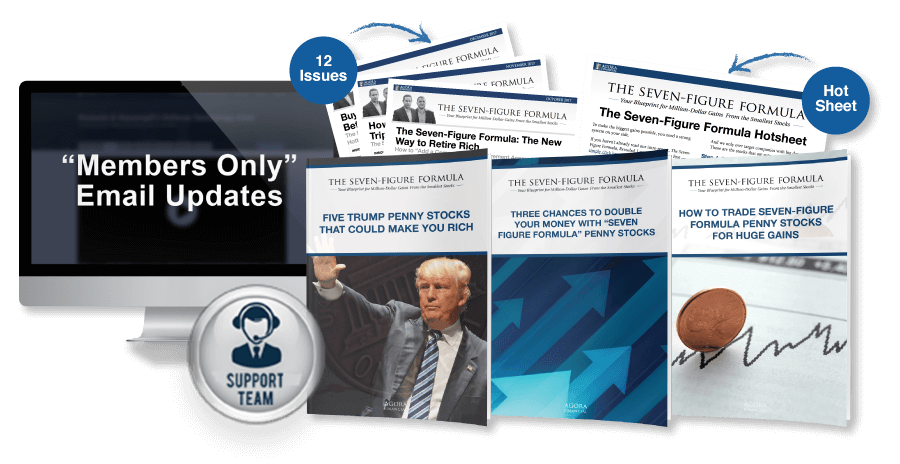 Is Cash For Patriots Program a Scam?

It’s hard to label this a scam, as their newsletter is real and some of the advice could prove to be financially beneficial. That being said, Zach isn’t exactly upfront about what’s really on offer, and Cash For Patriots has nothing really to do with Donald Trump and his tax reform.

You’re not being scammed by paying to subscribe to the newsletter, but every time I come across something created by Agora Financial (newsletters published by Banyan Hill), they use bait and switch tactics to get people to join.

It may not be a scam, but I don’t like they way this company plays. They’re not exactly honest or transparent, and there is always a lot of hype attached to everything, making it sound like you can basically get free checks in the mail when nothing could be further from the truth.

I don’t have a lot of faith in this one.

If you are interested in making money from trading, maybe try giving the Forex market a go, with a little help from the great training over at the Traders Academy Club.

A Way To Make Some REAL Money Online! 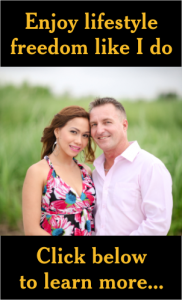 Not everything online is on the dodgy side, fortunately. There is some really good stuff out there to help you make money, or train you on how to do it successfully. The more transparent and honest an opportunity is, the more likely it’s legit. Reading reviews like this one is a great way to avoid scams and find the worthwhile stuff.

Millions of people all over the world make great money on the internet, and one of the most popular ways is with affiliate marketing. It’s what earns me the majority of my online income, much of which is passive income. Having a simple, but profitable, online business like affiliate marketing, where you get to work your own hours from home, really does give you true lifestyle freedom.

You can choose to do it part-time or fulltime. It’s up to you. There is a lot of freedom in this business, as I said. Some affiliate marketers even go on to make fortunes from this, so it’s all possible.

It’s also important to point out that you don’t need any real money to get started, plus running a business like this one has extremely low overheads and running costs. It’s more just your time, really.

If you have five minutes spare, I’ve written a complimentary make money online (MMO) guide to help people get started. You can take a look at it by clicking the banner below.

Inside the guide I briefly explain how money is made with affiliate marketing and just how simple the concept is. I also list a few of the many advantages to working online from home, and introduce you to the awesome training I did that kicks off with a FREE trial. It’s the best way to get started, and set off on the right foot.

2 thoughts on “Is Cash For Patriots Program a Scam? FREE Checks Anyone?”