Is Humanatic a scam or not? That's a question many people were asking about this platform. What exactly is a call reviewer and how do people like you and I make money reviewing phone calls? Is it legit or not?

This is how I make real money online. Click the banner for details…

First up, I'm really happy to see you here reading this review. It proves you first do some homework before joining something. With so many make money online (MMO) scams out there, that's always a wise course of action.

If you’ve ever called a company or a government department and either received a recorded message or been told that the call is going to be recorded, then this is where a company like Humanatic ties it all together.

What Humanatic does is offer a portal between companies requiring feedback, and call reviewers (people like you and I looking to earn some extra income).

It’s kind of a bit like doing paid surveys, except instead of answering some pointed questions, you are listening to the interaction on phone calls and offering your opinion on how service can be improved by answering questions at the end.

There are far better and more profitable ways to make money online in your spare time. Check out affiliate marketing. It's what I do to earn $1000s a month in passive income (the best kind of income there is). I did the training at Wealthy Affiliate, which is free to join.

Companies contract Humanatic to review the recorded customer service phone calls and offer their feedback. Humanatic has many reviewers on their system, and when you listen to a phone conversation that’s up for review, at the end of it you answer one or more questions and that’s it.

Sounds pretty easy, hey, but it’s also quite tiresome and boring. Some of these conversations can drag on for quite a while, and much of the time the dialogue is not particularly riveting.

One aspect about this that appeals to people is you don’t need any experience. Anyone can sign up and review phone calls. You can also work whenever you want. There is no set schedule, so you can do it in your spare time and not have it conflict with your regular routine.

Does making $10k a month online sound appealing? Click here to learn how…

Now the REAL Question – How Much Money Can You Make?

Okay, you are not going to make a financial killing from reviewing phone calls for Humanatic. In fact, you’ll practically be working for slave labour rates of pay. Yes, you will get paid for your time and effort, but not much.

Humanatic state that they pay only a few cents per phone call reviewed. Now this might be okay if the calls are really quick, like one minute, but some calls can drag on for 10 minutes or so.

According to Humanatic the average hourly rate for doing their work is anywhere from $1 to $4.50 per hour. More likely it will fall somewhere towards the bottom end of the spectrum.

Those are the kind of pay rates you would expect working in a third world country, not the USA.

In my opinion this is a woeful trade off of your valuable time for money.

You need to reach a total of $10 before you can request a payout via PayPal.

This is targeting anyone with some spare time who wants to make a little bit of extra cash online. Frankly I think you could make more doing surveys than reviewing phone calls on Humanatic, but people obviously do this gig, some 50k reviewers on their platform. 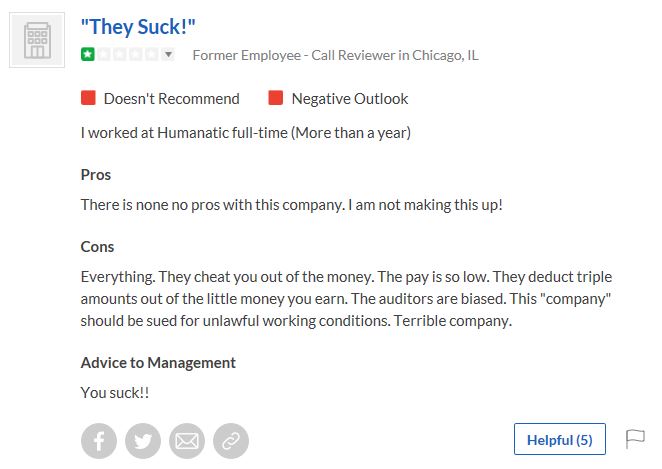 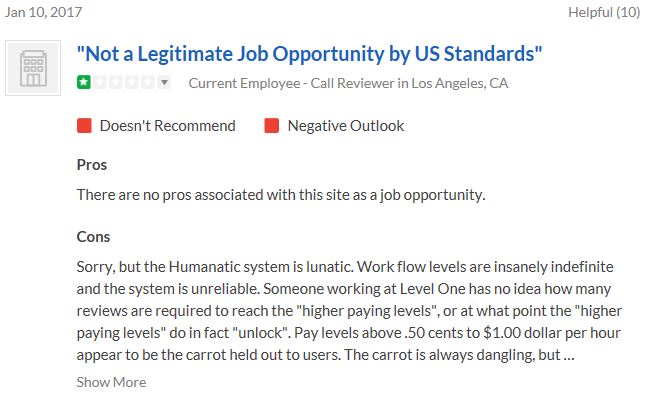 How Much Does Humanatic Cost?

Is Humanatic a Scam?

Some are labelling this company as a scam because of the way they disable accounts when people request a payout. I won’t call it a scam though, because there are people out there actually earning some money from this.

My biggest complaint, or reason not to recommend doing this, is because of the terrible rate of pay. There are far better things you could be doing with your time if you want to make decent money online. Read below for more info…

Forget reviewing phone calls for pennies or doing paid surveys for peanuts. If you want to make some real money online, then just follow what I do.

There’s no need to reinvent the wheel. All I did was follow in the footsteps of others who are successful online and did the same. You can do it to.

To read about my #1 recommendation to make money online, just click on the banner below.