Lottery Winner University is a scam or not? Is there really such a place where you can learn how to win the lottery, or is this just some kind of shiny object scam to take our money?

What Is Lottery Winner University?

It’s a catchy name, no question. We see training programs and online universities for all kinds of things, but this is the first time I’ve ever seen a “university” that teaches its students how to win the lottery.

Yeah, I’ve seen secret systems advertised, and software programs that log the historical data of various lotto draws around the world, but until now I’ve yet to come a platform that claims to be a lottery university.

Anyway, the place is run by a guy named Richard Lustig, who is apparently a 7 time lotto winner. We’ll talk more about him in the next section. The whole idea of the platform is for Richard to teach you and I how he’s managed to win all these major prizes and what systems he uses to pull off these seemingly magical feats.

Richard claims he can help people stack the odds in their favour so they have a better chance of winning the big one, as well as much more chance of regularly winning the smaller divisions.

He even has tips on how to win prizes regularly on scratch it tickets as well.

Or you could join the Wealthy Affiliate community to learn how to make some passive income without luck involved.

When you land on the website you are presented with a pretty hyped up sales video. If you prefer to read more detail, there is an option to switch to a page of text that tells you all about Lottery Winner University, Richard Lustig, testimonials from “students” who have won major prizes with his training, as well as numerous photos of Richard with famous people or being featured on the news.

Some Background On Richard Lustig

When you first hear that Richard Lustig has won 7 major lottery prizes, the first thought I had was that it was just sales talk and BS, but it’s actually true. You can find evidence on the internet when you do some research. Richard has really been featured on TV and the news on a number of occasions due to his “lotto luck”. Because of his miraculous feat he’s even been featured in the world famous Ripley’s Believe It Or Not.

All of his major wins occurred between 1993 and 2010. I can’t find any information on him winning a major prize since then.

He’s also written a book about it called – Learn How To Increase Your Chances of Winning the Lottery.

While winning a major jackpot just seems like a fantasy to most of us, this Richard guy obviously has some insights to offer having seriously won 7 major prizes. So maybe there’s something to his Lottery Winner University after all.

Richard says he has spent the last 20 years of his life developing his winning formulas; formulas that have led to him winning millions in Florida lotteries. Using processes of “reverse engineering” the historical data of lotto results, Richard devised ways and methods that vastly reduced the odds, putting the chances of regular wins and big wins within the player’s grasp.

When you sign on for the Lottery Winner University, Richard shares those winning formulas with you, allowing you to have more of a chance to achieve the remarkable results he’s been able to achieve.

Over a period of time each number will end up being drawn roughly the same number of times. It’s like flipping a coin. With enough flips the ratio of heads to tails will be close to the same.

With this in mind, it is possible to narrow down the odds somewhat by coming up with numbers that are “overdue” to make an appearance, based on probability. It’s still going to be very to hard to pick 6 from 6 or 7 from 7, but with winning those smaller divisions on a more regular basis, I can definitely see that happening.

The big one is still possible, but even with systems, is going to take a lot of lady luck to pull it off.

The obvious target market is people looking for ways to better their chances of pulling off a big lottery win and get rich. With some systems that lower the odds, although a major jackpot is still highly unlikely, winning smaller prizes more often is definitely on the cards.

How Much Does Lottery Winner University Cost?

It costs $49 per month to become a member of the Lottery Winner University. If it can help you win regular prizes every month, then that will be well worth it. 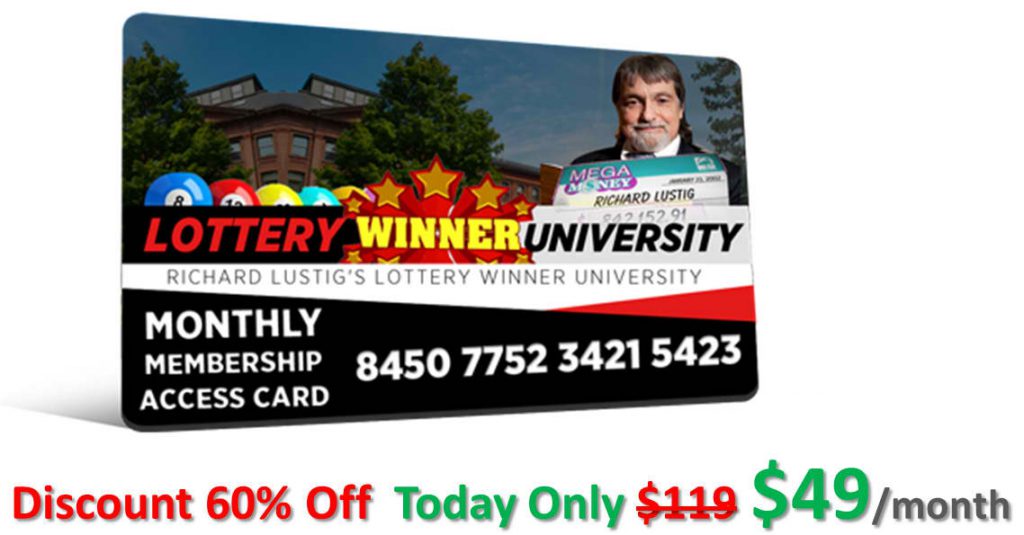 Is Lottery Winner University a Scam?

I don’t think there’s any scam going on here at all, but whether this “university” can help you pull off that massive, elusive jackpot…well, who really knows? I guess it’s not impossible.

This platform is not really being sold as a way to win first division prizes anyway. What it is designed to do is teach people ways and formulas to put the odds more in the player’s favour, giving everyone a chance of regularly pulling in those smaller wins and making a profit.

I can definitely see that being possible, and likely somewhat profitable. Of course, no matter what lotto you are playing, you still have to spend money on the tickets, but with luck more on your side, then there is the chance of actually making more than you spend.

I always buy lotto tickets on the off chance of pulling off a big win, and I can definitely see value in coming up with systems to lower the odds of winning. However, I also like to have more realistic ways of making money happening, and that’s why I have an online business.

I do affiliate marketing online and it brings in consistent streams of income from a number of sources. Much of my income now comes in passively, which is great. It gives me genuine lifestyle freedom.

If you would like to learn more about it, I’ve written a free guide, and you can check it out by clicking on the banner below.