What is Formula 1 Lotto System? A scam? Or can this system for playing the lottery really predict the winning lottery numbers like some secret, magic code?

Click below and copy how I make $1000s a month every month online!

What Is Formula 1 Lotto System?

I’m always sceptical about alleged lotto systems. I’m not saying they can’t work at all, but the likelihood of predicting all winning numbers in one game is still astronomical odds no matter what system you are using. However, the Formula 1 Lotto System is not really promoted as a way to win the big one, but more as a way to win the smaller prizes more regularly, with a sprinkling of bigger wins thrown in.

A guy named Glen Hooke presents us with the Formula 1 Lotto System. He claims that his system can deliver some form of lotto win an average of 8.7 times out of every 10 games you play.

Now that’s not first division jackpots. Most likely this is smaller prizes that are easier to win, but if it’s for real, you would be making a tidy profit at those win rates.

Glen goes on to claim that over the last 10 years he has managed to win a total of $425,576 using his Formula 1 Lotto System.

When you arrive at the website you are greeted with a sales video and basically one massive page of text that hypes up the product and is littered with glowing testimonials from other winners. It’s a typical sales page for any sort of “make money” scheme. Sell the dream of the money you can win in the hope that people buy the program.

Glen Hooke doesn’t take full credit for his lottery system. He gives that to a mysterious 64 year old MIT professor who spent 27 years of his life developing this “winning” formula. Apart from being a professor, all we know about him is that his name is Robert, and that he’s a math statistics genius.

Glen met Rob in a bar and on the TV there was a lotto draw. Rob checked off his lotto ticket and managed to score 5 numbers out of 6. Glen and Rob got talking, and over the next few weeks Rob revealed his secret lotto system to Glen and the rest is history.

Like so many lottery systems, Formula 1 Lotto System works on using historical draw data from a variety of lotteries. This historical data is them compiled using algorithms built into a specially-designed software program.

The idea of collecting all the data is to try and determine which numbers are most likely going to come up based on the laws of probability.

There are two schools of thought when it comes to trying to predict winning lotto numbers. On one side you have “experts” that claim it’s all totally random, while on the other side of the fence there are those who are avid proponents of the law of probability.

What is the law of probability?

When it comes to lotto numbers, it’s based on the principle that each number has an equal chance of being drawn. Therefore, if a particular number hasn’t been drawn for a while, then it’s “more likely” to appear. Try flipping a coin 100 times and you’ll find the ratio of heads to tails is somewhat close to even.

Some people are quick to denounce this law, but if it wasn’t real, then every casino of earth would have gone broke by now. They base their profits on the odds and probability, and then increase those odds slightly in their favour so over time they always come out ahead.

Discover how I make $1000s a month online in passive income. 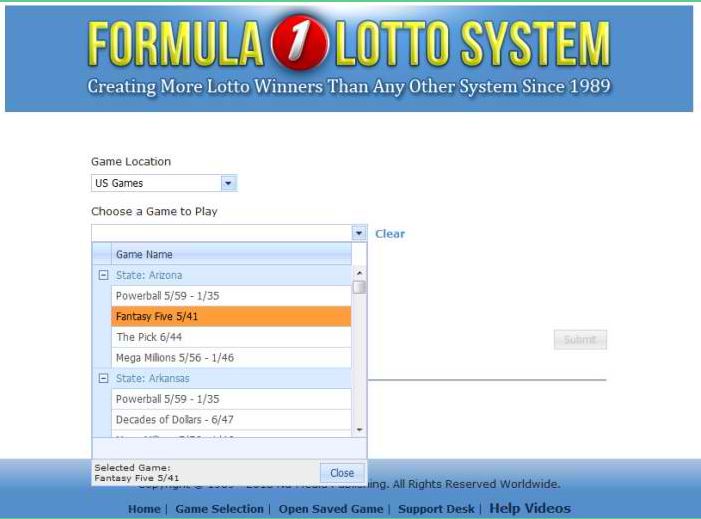 Will It Really Work?

It’s not impossible, based on what I’ve gleaned and my understanding of probability. To claim the system will help you win a jackpot is a bit of a stretch to say the least, but it could likely help you win those smaller divisions more often. Depending on how that unfolds, it could end up being profitable.

The 87% success rate is a bit convoluted in my opinion. I doubt whether the rate of success would be that high.

Obviously aimed at anyone who wants to increase their chances of winning the lotto; whether it be a major prize of more smaller prizes. I guess schemes like this also appeal to the get rich quick mentality as well.

How Much Does Formula 1 Lotto System Cost?

It costs $59 to get your hands on this “winning lotto formula”. On the website it tries to make you hurry up and buy by saying that it’s currently discounted by 60%, but it always costs $59, so ignore that. 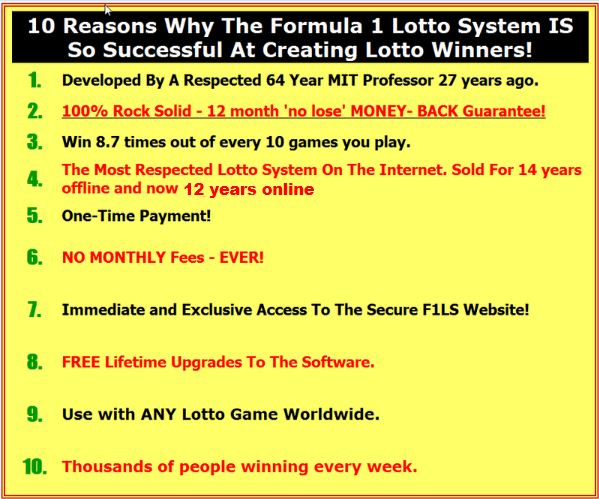 Is Formula 1 Lotto System a Scam?

I wouldn’t outright say this is just some scam to take your money. There are a lot of gambling systems out there, and quite possibly Formula 1 Lotto System could help make playing the lotto more profitable.

The likelihood of winning the big one is still a long way off, but if you can win those smaller prizes more often, with the odd bigger win thrown in occasionally, then the system could help you to be profitable.

I always play the lotto on the off chance I could win something big, but I’m also a realist and establish other ways to keep me in the money.

I derive just about all of my income from online sources, and my major income earner is my affiliate marketing business. It’s easy to run, costs very little, and it brings in multiple sources of income, many of which are passive.

If you would like to learn more about it and how you can get started on the path to financial and lifestyle freedom, I’ve written a free guide. You can read it by clicking on the banner below.