Passive Paychecks is a scam or isn’t it? Many have been asking this question. It sounds like it could be something really good, delivering an income on autopilot, but does it really work?

Click below if you want to discover how I earn passive income online! 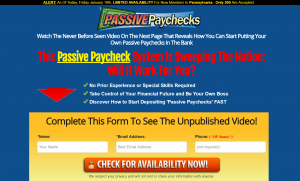 What Is Passive Paychecks?

I like the sound of this scheme – Passive Paychecks.

So let’s see if this particular program can truly deliver on the promise of passive paychecks.

The guy who presents the sales video doesn’t mention his name, whether he’s the owner, or who runs Passive Paychecks. What he does manage to do, though, is name drop some famous names, such as Oprah and Richard Branson. He claims these people use his secret trick to make money.

Not only that, but this secret trick actually makes millions of dollars online each year for people who choose to use it. Best of all, Passive Paychecks is willing to reveal this secret trick used the world over by famous millionaires and billionaires, all for the bargain price of just $47.

If you want to make some serious money online for real, with no scams, then just do what I do. Click here to learn more about it. 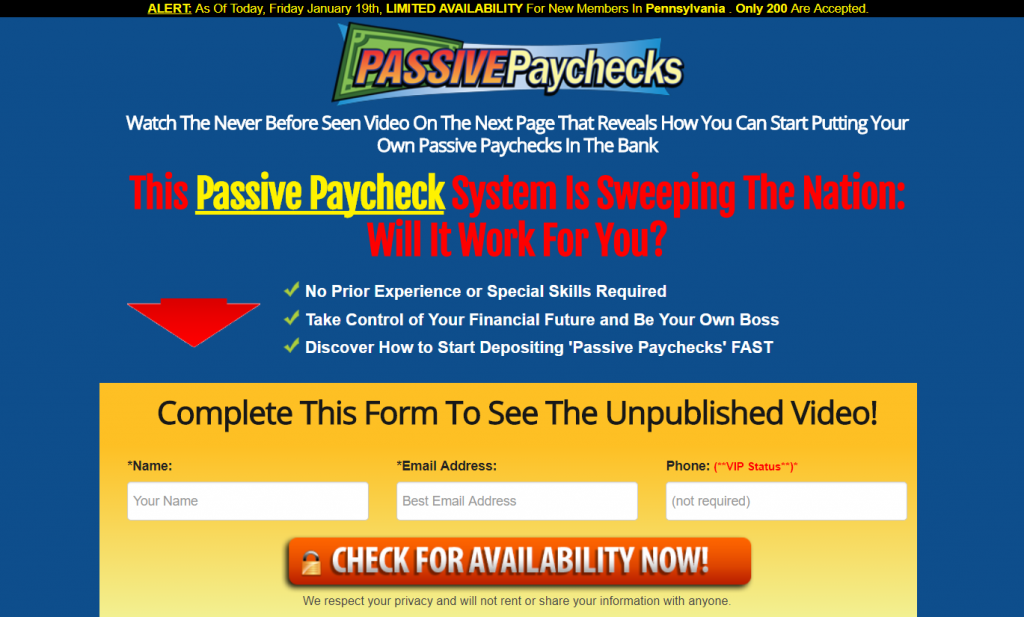 What This Really Is All About

Passive Paychecks is no secret system. In fact the exact same platform has been rebranded under different names many times over the years.

There is a program called 21 Steps, and it’s an integral part of the MOBE MLM sales funnel. It’s the process of 21 different steps that MOBE members go through so they can start paying for expensive upsells as they advance through the MOBE system.

All Passive Paychecks is, is a platform created by a MOBE affiliate to try and funnel people into MOBE so the site owner earns commissions. There’s nothing wrong with making commissions as an affiliate, but at least be honest about what you’re selling. This affiliate is pretending to have his/her own money making scheme, when all it is, is a feeder site and nothing more than that. 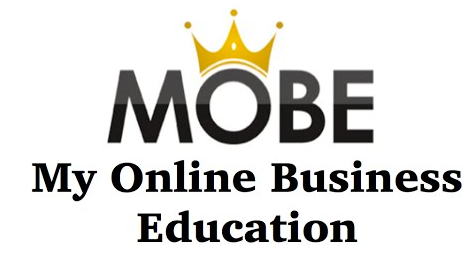 If you are unfamiliar with the MOBE platform, then I’ll briefly explain what it’s all about, or you can read my full MOBE review here.

MOBE offers a whole suite of products, many of which are training programs. The whole concept of MOBE is to buy into the system, then sell the same system to others and make commissions. You are taught how to sell MOBE products to others, basically.

With MOBE, and another platform called Aspire works exactly the same way, in order to be eligible to earn commissions on the sale of a particular MOBE product, you must first purchase that product. Now while MOBE has heaps of products and trainings available to sell to others, you can only make commissions on the ones you personally own.

They heavily encourage people to go “all in” so you can earn on everything, but to go all in and buy everything there is at MOBE would set you back about $50,000!

That’s a hell of an outlay. Yes, you can earn great commissions if you can sell it to others, but you have to pay through the nose to first put yourself in that position.

There’s nothing necessarily wrong with platforms such as MOBE, but I don’t really like the way they basically only teach you to sell MOBE and have no interest in training you to have an online business where you can promote any product you like. I also don’t like the way they insist you have to buy a product yourself first in order to be able to earn commissions on it.

This is targeted at people who want to get started making money online, and many people have heard about passive income and would like some of it.

How Much Does Passive Paychecks Cost?

The asking price is $47, and this buys you the most basic membership in the MOBE platform. That $47 is simply the very start. Once you start going through the 21 Steps program, you’ll have to keep paying for expensive upsells before you can keep progressing. And as I mentioned earlier, to go all in with MOBE will set you back around 50 grand.

Is Passive Paychecks a Scam?

MOBE is not a scam in my opinion, despite my reservations that I mentioned above. However, I’d have to think a little differently about this affiliate’s website, Passive Paychecks, as it’s basically lying to people. The affiliate makes out like it’s some brand new money making scheme, that people like Richard Branson are involved, and that you’ll be making all this passive income on autopilot.

This is all just BS!

Even if you join MOBE, it won’t be instant riches and it certainly won’t be passive. How hard do you think you’ll have to work to convince others to buy into MOBE and then spend tens of thousands of dollars on MOBE products?

Doesn’t sound like it would be too passive at all.

Give this one a miss.

Check Out My Top Recommendation and Make Money Now!

If you’re interested, the best way to get started is to read my free guide. It only takes 5 minutes to read and is well worth your time. Check it out by clicking on the banner below.