Tired of scams and programs that don't deliver?

Founder: A Community of Entrepreneurs

What Is Bitclub Network?

Opportunities involving Bitcoin and various other cryptocurrencies are pooping up like mushrooms these days. As digital currency continues to gain in popularity, so do the so-called opportunities to either invest in them, or make money with them via some scheme.

So what is Bitclub Network? Just an investment opportunity or something more?

The company is based in Iceland and it was started by a group of entrepreneurs who all share the same passion – Cryptocurrencies. These guys claim that merely investing in Bitcoin and sitting on it won’t make you anywhere near as much profit as joining their scheme will. In fact they boldly claim you’ll stand to make up to 8 times more profit in 3 years in their system than just sitting on your Bitcoin investment the usual way.

Big claims, but can Bitclub Network actually live up to that statement?

Bitclub Network has software that enables the company to mine more Bitcoins, which is essentially just the process of unlocking more Bitcoin. This then allows those newly-unlocked Bitcoins to enter into circulation. Apparently they can even mine other digital currencies and convert them into Bitcoin.

Bitclub Network say that when you join you are essentially investing in their Bitcoin mining operation, and as more Bitcoins are mined, you’ll share in the profits.

Currently Bitclub Network has multiple thousands of investors from all across the globe. A company claiming to mine Bitcoin is nothing new, but often these schemes are nothing but a quick money making scheme for the creators. Perhaps that’s all Bitclub Network is.

If we take a look at their compensation structure we’ll get a better idea of what’s really going on here.

When you invest money with the Bitclub Network, they claim they use those funds to purchase tech equipment, such as computers and the like, to help with their mining operations. I would assume they would already have all the tech gear they need to run their operation and mine Bitcoin, so that kind of just sounds like an excuse to get your money. Or more likely, a reason to give to the authorities for charging you an investment amount.

You see, what this is really about is recruiting new members into the “club”. When you add new recruits you can earn money off those recruits. This is really a revenue sharing scheme using Bitcoin investment and mining investment as some sort of token service to make the scheme sound more legal.

You buy mining shares when you join Bitclub, just like you might buy ad packs for other typical revenue sharing Ponzi schemes. This is really no different, except it’s “digital currency mining” and not traffic exchange.

The more shares you buy, the more money you can potentially make. Likewise, the more people you refer the more profit you stand to make from those referrals.

Here are the mining pools you can “invest” in:

The credits are what you earn when you get someone new to join the mining pool as your recruit. The more recruits, the more credits you earn.

The MLM structure is a binary one, meaning you have a left and right downline leg. You need to earn a total of 15 credits in each leg to earn a profit of $200. So as you can see, this is totally about recruiting new investors or you can’t make any money. 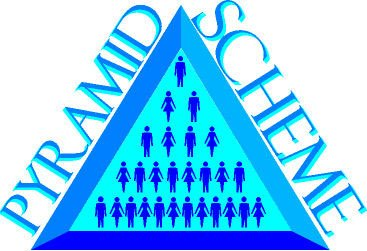 To me this does look like an illegal pyramid scheme. Yes they claim to have products in the sense that you are mining for and investing in Bitcoin, but that’s really no more of a tangible product than ad packs.

A naked pyramid scheme is the illegal one, and that’s classified as a scheme that has no tangible products of value, has no retail sales and relies solely on recruitment and new investors to financially survive.

To me the Bitclub Network fits this definition.

Some might argue that Bitcoin has value, and it does. But no one here is really buying, selling or investing in Bitcoin. You are simply putting your money into a multi level marketing scheme and then have to source new recruits, who then need to invest their money so you can be paid a profit out of their investment.

Pyramid scheme or Ponzi scheme. Call it what you like. That’s what the Bitclub Network appears to be. The Bitcoin side of it is nothing more than a gimmick, knowing that Bitcoin and the mere mention of it gets people salivating big time these days.

Only if they are truly mining Bitcoin and the members are receiving Bitcoin in profits, can this scheme avoid the tag of illegal pyramid scheme. But where’s the proof of all the actual Bitcoin mining?

These schemes always target people who think they are going to make some quick, easy cash. They don’t realise just how long and hard the recruitment process can be. This particular Ponzi scheme is trying to cash in on the Bitcoin craze by tossing the name “Bitcoin” into the mix.

How Much Does Bitclub Network Cost?

At a bare minimum you need to invest $500 to have a go at this revenue sharing scheme. If you decide to go all in you’ll be out of pocket $3500. That’s a pretty big risk on something like the Bitclub Network. 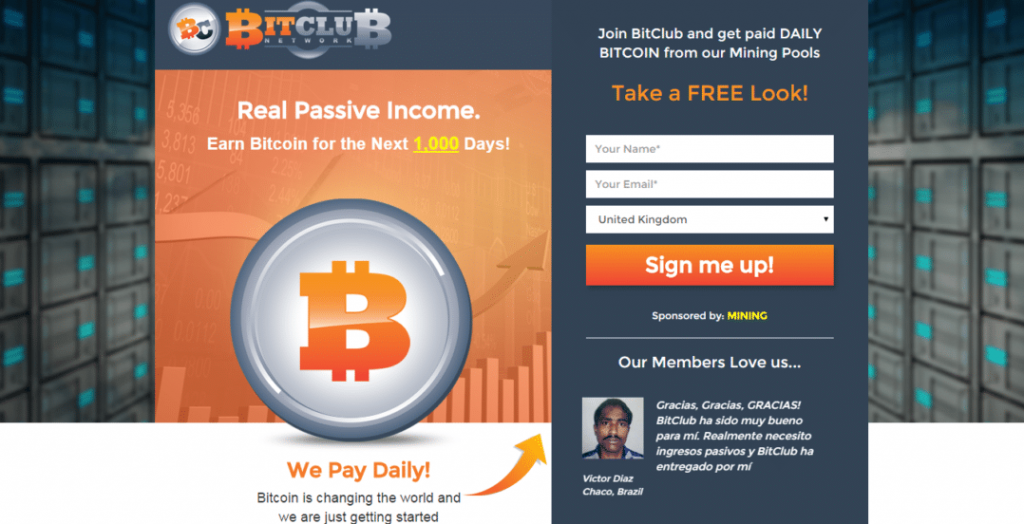 Is Bitclub Network a Scam?

I’d say this one is sailing pretty close, however it is possible you could make some money with this scheme, so  it’s not an outright money rort or something. I can’t say I recommend it, and it doesn’t really appear to be a genuine Bitcoin mining or investment opportunity.

Another thing to point out is this operation is not transparent in the slightest. It’s very hard to dig up any additional information on the owners of the scheme or its real operations. That’s always a major red flag to me. After all, what are they hiding? Why don’t we know who they are?

Would you really want to hand over your money to a group a people who won’t even reveal their identities? That’s even riskier than handing your cash to a stranger in the street to invest in some scheme. At least you can actually see that person. Playing the lottery is less of a risk.

Sounds dodgy as hell to me.

If you want to make money online, with something that costs virtually nothing to try and will stand the test of time, then give affiliate marketing a try. I’ve been doing it for a few years now and I make more than a fulltime income from it.

Great training is what led to my success. To learn more about affiliate marketing and the training I did – which starts with a free trial – just click on the banner below and read my guide.

2 thoughts on “Is Bitclub Network a Scam? Bitcoin Mining or Cryptocurrency Con Job?”