Is Phoenix Power Rising a scam? Can you really making a financial killing with this money matrix? Or will it leave you high and dry like so many of the others do?

Don't put up with the scams. Copy me in making great money online… 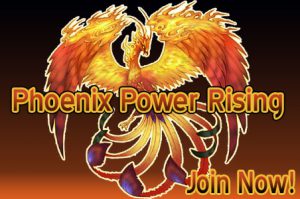 What Is Phoenix Power Rising About?

Sources around the internet claim that Terri Petty, the creator of Phoenix Power Rising, is a known scammer. It is alleged he ripped a lot of people off in another project he had going back in 2010 called “Project4Freedom”. A few years later he launched Phoenix Power Rising in 2012, ready to score another truckload of everyone else’s cash. It lasted a short while, then collapsed into a smouldering heap. Since then Phoenix Power Rising has risen from the ashes once again and was reborn in 2016. This guy just keeps coming back for more.

So what is Phoenix Power Rising about and can it make money or not?

This is yet another money matrix system. There are so many of these doing the internet rounds these days and are especially popular in Facebook groups. PPR utilises a 2×3 matrix with 16 total positions and 3 matrix levels. Here’s what it looks like:

In an attempt to try and give this matrix legitimacy and make it more “legal”, Petty has incorporated a suite of imaginary products. These products are supposed to be real and tangible products with which to earn commissions from, but really they are just a ruse to try and validate an illegal Ponzi scheme – Which all of these matrix systems are.

Terri Petty claims that his program has an exemplary record of doing business with over 300k suppliers during the past 45 years. That’s interesting. PPR only first kicked off in 2012. I had no idea we are now living in the year 2057.

The product line is just BS designed, like I said, to lend this scam some legitimacy; as if it’s a real business and not just a recruitment drive to suck people into a Ponzi scheme.

Some people just dive right into these matrix systems. Obviously people do get paid out occasionally, or I guess people wouldn’t keep joining them. Phoenix Power Rising attracts people who are willing to take some monetary risk (and that risk is actually quite high), in order to receive a quick return on investment with very little effort.

You get access to the Phoenix Power Rising matrix system. As far as promotional tools go, it’s really up to you to find ways to lure other people into your money matrix. Most people seem to achieve this through relevant Facebook groups. There are plenty of them catering to get rich quick schemes, money matrix systems and revenue sharing programs.

How Much Does Phoenix Power Rising Cost and the Compensation Plan?

Some of these matrix systems can seen a little complicated in how they work, and they are all slightly different. I’ll try and explain it as best I can.

Your initial investment is $120. After joining and recruiting 2 people under you, those people then need to recruit 2 people under them until a total of 14 is reached. You will now cycle through the matrix on Level 1 three times, which will mean you have now earned enough money to purchase a Level 2 position in the matrix. Keep in mind that each time you get recycled into Level 1, it costs you another $120. So by the time you’ve gone through 3 times you’ve spent $360, generating you a total profit of $540, allowing you to join level 2 at a cost of $500. We mentioned the payout figures for each level earlier, but I’ll slot them in here again:

In order to make any real money with this you must complete the matrix cycles on level 3, and this is where it gets extremely risky and you could do your dough. Also, the higher up the matrix you go (remember a money matrix is shaped like a pyramid), the more people that need to be recruited under you to make the system work. After all, if you really are going to get paid out handsomely at the top level, then all that extra money has to come from somewhere. It can’t just be made up from the initial 14 recruits.

In order to make this work you would need a hell of a networking system in place, as well as a lot of patience. These schemes are promoted as a quick way to make cash, but in reality they can be very slow. Why? Because the system only cycles as fast as the recruiting happens. Everyone recruited then has to be willing to keep committing money to the matrix and also be willing to buy into the next level.

Is Phoenix Power Rising a Scam?

I believe all these money matrix schemes are a scam. Yes, sometimes people do make money, but generally it’s the person who started the matrix that walks away with all the cash. They disappear for a while, spend their money, then come back and start another matrix. The system cannot sustain itself for too long and loads of recruits are simply destined to lose their cash. These all collapse. It’s a mathematical certainty.

If you want to earn an income online that has scope for real growth and longevity, then you should seriously consider an online business. The advantage of running everything online is that you can work from anywhere. This gives you some real freedom in so many ways.

I do affiliate marketing for a living. There is way less monetary risk involved than that of entering a matrix, and the pay days can be huge once you are established. Anyone can successfully run an affiliate marketing business if they are shown how.

To learn more about how I got started and where I learned the basics and essentials of being successful, just click the banner below for info…